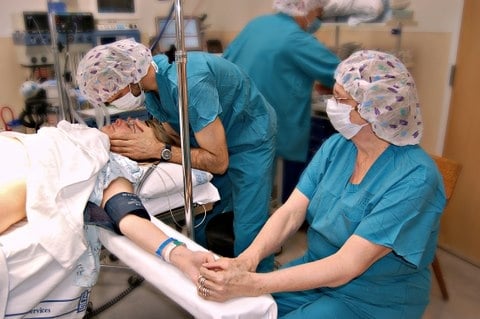 A look at types of cesareans and the common medical reasons why women may have a cesarean today.

It seems that when you talk with your friends, they have all had an “emergency cesarean”. Contrary to what most people believe, very few cesareans performed today are done for emergency purposes.

Let’s define the cesarean types so that we can be using the correct terms:

1. Scheduled cesarean – this type of cesarean one that is planned ahead of time with or without an indicated risk. (example – breech baby)

2. Elective cesarean – this is a type of scheduled cesarean that is done without specific risk. Sometimes used interchangeably with the term “scheduled” cesarean (example – following a previous cesarean)

3. Unplanned cesarean – this cesarean typically follows after labor. There is typically no specific risk to either mother or baby. (example – labor not progressing)

4. Emergency cesarean – this is a cesarean that takes place to save the life of the mother or baby or when there is immediate risk. (example – placenta abruption)

The newest term for fetal distress is actually “nonreassuring fetal heart rate” pattern. There are several examples of nonreassuring FHR such as a progressive decrease in the baby’s heart rate or the baby’s heart rate repeatedly dropping after contractions. Parents should be aware that there are many normal fluctuations that occur during labor and that it takes specific training to identity the difference between a normal variation in the heart rate versus fetal distress.

Depending on the frequency and/or severity of problems with the baby’ heart rate, fetal distress may or may not result in an emergency cesarean.

Placenta previa occurs in about 5 out of every 1,000 births. Instead of attaching to the upper part of the uterus, the placenta attaches to the lower section of the uterus. If the placenta partially or completely covers the opening of the cervix, a cesarean is required. In some cases, previa will resolve as the placenta moves up and away from the mother’s cervix with the expanding uterus.

An ultrasound will often be done in late pregnancy to determine if the previa has resolved. If the previa has not resolved, often a scheduled cesarean takes place close to the mother’s due date.

A placental abruption is a rare, life-threatening situation that occurs in about 1% of all pregnancies. The placenta begins to separate from the lining of the uterus before the baby is born. This is one case where a true emergency cesarean would need to be performed as quickly as possible.

Breech babies account for about 4% of all births. Fewer and fewer providers have the skill to delivery babies in a breech position so they frequently recommend that the mother has a cesarean. The fact is that some babies, either with various techniques or the mother’s positioning, will often turn to a head down (vertex) position. There are ways to turn breech babies and find a provider willing to deliver a vaginal breech baby. If the mother had a cesarean as a result of a breech baby, likely it would be a scheduled cesarean.

Multiple babies can add more complications to the birth. There is a tendency for a second or later baby to take longer in labor and/or be in a breech position. There are providers who will attempt vaginal births for mothers with multiple gestation. Often the providers who work in larger teaching hospitals are more likely to offer vaginal births as an option for twins or triplets.

If there is no option for a vaginal birth, likely the cesarean for multiple babies would be scheduled/elective.

This is the area that many birth professionals believe is the best place to target in terms of reducing the cesarean rate. The labor might be long, either in early, active labor or in pushing. There may be little or not progress for several hours but there is no apparent indicated risk to bother or baby. Some experts have found that this one subset of labors, “dystocia” accounts for about 1/3 of all cesareans performed in this country!

A woman who had a cesarean after being in labor without progress for some time (dystocia) would have an unplanned cesarean.

Statistics show that elective repeat cesareans also accounts for about 30% of all cesareans. This number is nearly all comprised of low-risk women who have had a previous cesarean and are opting for another cesarean with a subsequent pregnancy. Along with the dystocia group, this area makes up a significant portion of the overall cesarean rate and includes primarily healthy, low-risk women what could benefit from a trial of labor.

Cesareans are a needed procedure for high-risk or life-threatening situations. Let’s try to keep this major surgical procedure limited to, as much as possible, those true emergencies. Mothers and birth professionals working together can significantly reduce the number of cesareans in this country, primarily in the areas of breech babies, multiple babies (twins, triplets), dystocia, elective repeat cesareans.

Do you feel that cesareans are done for emergency reasons? Tell us what you think.